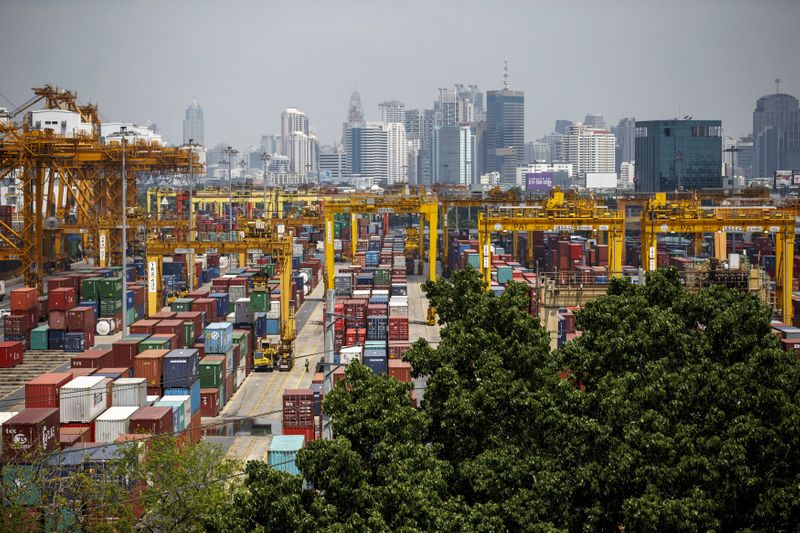 BANGKOK (Reuters) – Thailand’s exports rose more than expected in July but the Southeast Asian country’s biggest COVID-19 outbreak to date and movement restrictions are likely to impact shipments in August and September, the commerce minister said on Monday.

Exports, a key driver of Thailand’s growth, increased 20.27% in July from year earlier as global demand improved, beating a forecast for a 19.7% in a Reuters poll, and against June’s 43.8% year-on-year rise.

Exports are a rare bright spot in Thailand as it struggles with a surge in infections, prompting movement curbs https://www.reuters.com/business/healthcare-pharmaceuticals/thailand-extends-stricter-covid-19-measures-until-end-august-2021-08-01 in areas which account for about 80% of gross domestic product (GDP https://www.reuters.com/article/idUSL4N2PL05N).

“The lockdown measures may have impacted the manufacturing sector as we’ve seen some closures of fruit factories for exports,” commerce minister Jurin Laksanawisit told a news conference.

The outbreak has increasingly affected factories factories and worsened https://www.reuters.com/article/idUSL4N2OV0R3 a labour shortage, threatening exports at a time of stronger global demand and a weaker baht.

On Monday, the Federation of Thai Industries (FTI) called on government support for factories including clear “bubble and seal” measures and more vaccines.

“The industrial sector is the only engine to GDP and exports and it wants the outbreaks at factories to be contained,” FTI Chairman Supant Mongkolsuthree told a separate briefing.

Industrial goods account for about 80% of exports which in July were led by stronger shipments of vehicle https://www.reuters.com/business/autos-transportation/thailands-booming-autos-exports-help-plug-gaping-tourism-hole-2021-06-29 and auto parts as well as computers and components.

Demand from key markets was higher in July, with exports to the United States up 22% year-on-year, to China up 41%, to Japan up 23% and to the European Union up 21%.

Imports in July jumped 45.9% from a year earlier, beating a forecast 43% rise, resulting in a trade surplus of $183 million for the month.

In the January-July period, exports rose 16.2% from a year earlier, while imports increased 28.7%, resulting in a trade surplus of $2.6 billion.

This website uses cookies to improve your experience while you navigate through the website. Out of these cookies, the cookies that are categorized as necessary are stored on your browser as they are essential for the working of basic functionalities of the website. We also use third-party cookies that help us analyze and understand how you use this website. These cookies will be stored in your browser only with your consent. You also have the option to opt-out of these cookies. But opting out of some of these cookies may have an effect on your browsing experience.
Necessary Always Enabled
Necessary cookies are absolutely essential for the website to function properly. This category only includes cookies that ensures basic functionalities and security features of the website. These cookies do not store any personal information.
Non-necessary
Any cookies that may not be particularly necessary for the website to function and is used specifically to collect user personal data via analytics, ads, other embedded contents are termed as non-necessary cookies. It is mandatory to procure user consent prior to running these cookies on your website.
SAVE & ACCEPT