COLOMBO — Amid a deepening foreign exchange crisis that forced the Sri Lankan government to impose an indefinite import ban last year to save hard currency, hundreds of businesses are fighting for survival. Smaller ones have shut down, costing many their livelihoods.

Since March last year, the government has banned imports ranging from motor vehicles and air conditioners, to beer, clothing items, cosmetics and even spices such as turmeric — an essential cooking item for most of local households.

Sri Lanka’s economy took a thumping last year after the country was forced to lock down following the spread of COVID-19. Tourism is one of the country’s main foreign exchange earners, but with global and local travel restrictions tourism earnings plunged to just $957 million in 2020, down from $3.6 billion the previous year.

Steve Chi, who ran a successful motorcycle dealership as an authorized seller of Suzuki motorbikes in the west coast city of Negombo, has fallen victim to the import ban and was forced to shut down his business last year. “They imposed the ban in March and by around the sixth month we didn’t have stocks to [stay in] business,” he told Nikkei Asia.

According to Chi, the import ban has caused the secondhand market to skyrocket. Used scooters sell for more than 500,000 Sri Lankan rupees ($2,510), where a brand-new scooter of the same model used to go for 350,000 rupees before the ban. He expressed disappointment over the government’s failure to take care of businesses, their owners, and employees who have fallen victim to the ban.

“COVID has [had] a massive impact, but the import ban is a bigger issue for us,” he said. One car shop in Colombo is seen only with two cars remaining for sales on July 27. (Photo by Munza Mushtaq)

The country’s leading automotive association, the Ceylon Motor Traders Association (CMTA), is echoing the sentiments of many other businesses that rely on imports. Yasendra Amerasinghe, the group’s chairman, said the impact on the industry has been “drastic.”

“It has been difficult on all our members … because we can’t plan ahead as we don’t know how much longer it will take for normalcy to be restored,” he said. CMTA members directly and indirectly employ over 32,000 people. Sri Lanka typically imports around 50,000 to 60,000 vehicles a year.

“It has been quite a challenge to continue to operate without resorting to mass-scale layoffs, but already we have small dealerships in rural areas who have been forced to close up for now and are engaged in other businesses to survive,” Amerasinghe said. 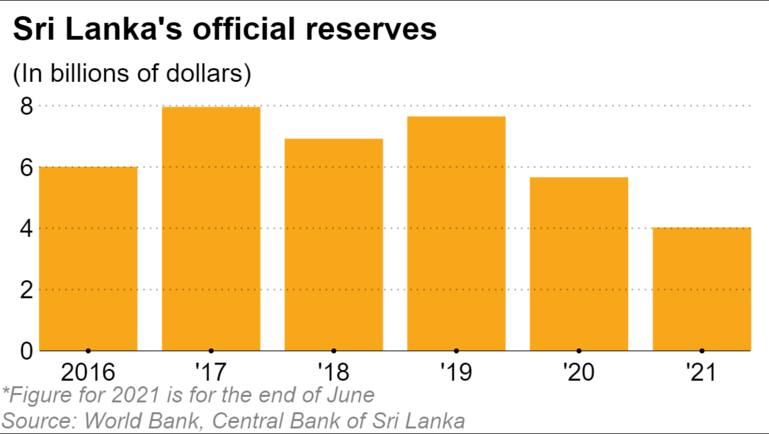 In a statement issued on July 27, Money, Capital Market and Public Enterprises State Minister Ajith Nivard Cabraal said after the repayment of the international sovereign bonds of $1 billion on the day, Sri Lanka’s foreign reserves total around $3 billion now.

W.A. Wijewardena, a former deputy governor at the central bank, said that reserves in Sri Lanka have fallen to a critically low level, causing forex to disappear from the formal market and sowing the seeds for a lucrative black market. The official exchange rate is 202 rupees to the dollar, while the black market offers up to 236 rupees per dollar. “Normally, in a healthy market, that margin should be about 1 to 2 rupees,” he told Nikkei.

Last week, Moody’s Investors Service placed Sri Lanka’s Caa1 foreign currency long-term issuer and senior unsecured debt ratings under review for a downgrade, while earlier this month Fitch Ratings downgraded Sri Lanka to the CCC category and disclosed that over the next five years, the country has to find $29 billion to service its debts.

After a quarter century-long war ended in 2009, Mahinda Rajapaksa, Sri Lanka’s former president, turned to China to fund various infrastructure projects, especially in Colombo and his hometown, Hambantota. Some projects in Colombo, including Mattala International Airport and the Lotus Tower, were seen as a colossal waste of public money. The tower remains closed to the public despite the completion of construction. Sri Lanka’s trading partners have sounded the alarm over the import ban. The value of European Union exports to Sri Lanka fell from 1.24 billion euros in 2019 to 904 million euros in 2020, a decline of 27% and the lowest figure in 10 years. Sri Lanka mainly imports machinery, pharmaceuticals, iron and steel products, and vehicles from Europe.

“The EU continues to have serious concerns with the broad import restrictions imposed by Sri Lanka, in various forms, since last year,” a representative from the Delegation of the European Union to Sri Lanka and Maldives told Nikkei, adding, “The EU has repeatedly called upon the Sri Lankan authorities to uphold [their] World Trade Organization commitments and the EU has raised this issue again at the WTO Committee on Trade in Goods earlier in July 2021.”

In April, President Gotabaya Rajapaksa announced the government will ban imports of chemical fertilizers, which cost the country $400 million annually. However, the former chairman of the Sri Lanka Tea Board, Rohan Pethiyagoda, warns that barring fertilizer imports will hurt Sri Lanka’s tea production and exports.

Pethiyagoda stressed that changing agricultural policy in an ad hoc manner could make problems affecting the sector even worse. “We can say we are going to use organic fertilizer, but there is no clear definition as to what constitutes an organic fertilizer,” he said.

He expressed concern for the country’s tea exports because the ban extends to other agrichemiccals. He said that the chemicals that are used in Sri Lanka are approved by the World Health Organization and the Food and Agriculture Organization. “When you suddenly change a policy, you have to be very careful about what the impact of the change will be,” he said.

Sri Lanka’s tea exports brought in 230 billion rupees last year. This year, from January to June, shipments amounted to 136 million kilograms worth 127.83 billion rupees, compared with 106 billion rupees during the same period in 2020.