MUMBAI/SHANGHAI — Shanghai Fosun Pharmaceutical’s Indian arm Gland Pharma debuted on the Indian stock exchange on Friday at a list price up 14% on its IPO price, as institutional investors gave the thumbs up to the injectable maker’s long term business potential despite overhang from tense Indo-Chinese relations.

The maiden share sale, through which the company raised 64.79 billion rupees ($874 million), became the biggest ever by a pharma company in India. The Hyderabad-based company’s initial public offering was subscribed 2.06 times, with qualified institutional buyers picking up the shares 6.4 times over the offer.

The stock opened at 1,710 rupees on the National Stock Exchange on Friday and increased to end the first trading day at 1,828.00 rupees, more than 21% above its IPO price.

Independent pharma expert Utkarsh Palnitkar said the response to Gland Pharma’s market debut had been buoyed by the outlook for the life sciences sector.

“You must have seen it with other pharma stocks as well. It is like riding the tide. The portfolio of Gland Pharma, especially what it has done in parenteral [medicine] is very interesting, so it is a combination of both.” He added that there had also not been share offerings in the life sciences space recently.

Gland Pharma’s IPO comes at a time when relations between India and China are at their most strained of recent years due to a dispute over their border. In the process of the intensifying confrontation, the Indian government has banned the use of smartphone apps provided by Chinese companies.

Gland Pharma acknowledged in its IPO prospectus that Indo-Chinese relations could be a risk factor for the company. It cited the example of the June 2020 confrontation that occurred between Indian and Chinese military forces in India’s northern mountains.

“Any degradation in Indo-China political relations or any future military confrontations could result in curbs or delays on the import from China into India of materials and equipment that we require to operate our business, increases in duties on imports from China into India, curbs on the export of finished products from India to China, and negative public sentiment within India toward Chinese-owned companies such as our company,” Gland Pharma said.

Gland Pharma sells its products primarily through a business-to-business model in over 60 countries, including the U.S., Europe, Canada, Australia and India. Founded in 1978 by technocrat PVN Raju in Hyderabad, the company was bought by Fosun Pharma in 2017. It has since grown rapidly and diversified from making liquid parenteral, drugs that enter the body by circumventing the digestive tract, to injectables. 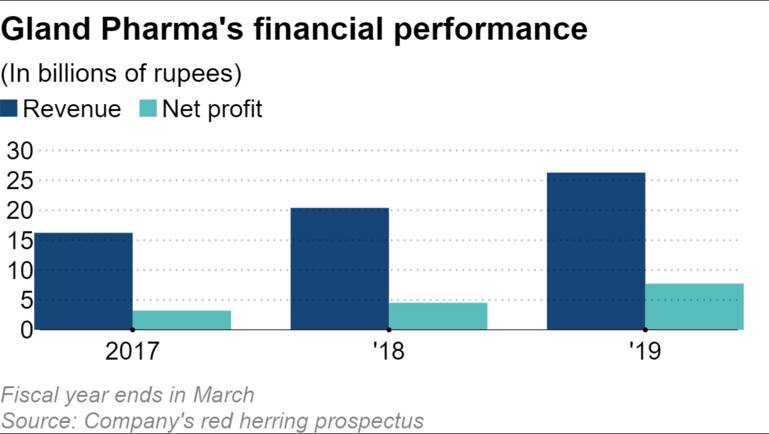 Gland Pharma’s injectable-focused generic drugs fit into China’s growing demand following a reform in 2018 to lower the cost of health care. Over 90% of drugs registered in China are generic and they are likely to remain dominant in the long run, according to an April report on the sector by Daxue Consulting in Shanghai.

This brought about “rapid growth” to Gland Pharma’s drugs segment revenue during the third quarter, according to Sinolink Securities. With manufacturing capacity expansion in the pipeline following the IPO, the company could align its expertise in injectable drugs with Fosun Pharma to increase market share.

Gland Pharma’s key products, such as heparin sodium and enoxaparin sodium injections to prevent blood clotting, are among the generic drugs with market potential in China.

For its part, Fosun Pharma could tap into Gland Pharma’s 200-strong research team, who have knowledge in research and development and regulatory requirements in different economies for market expansion.

Such a collaboration would serve the restructuring goals unveiled by Fosun International, the parent of Fosun Pharma. The Shanghai-based conglomerate is consolidating from an investment focus to strengthening its footholds in a sprawling business empire that includes beer and professional soccer.

“Today, we do not aim to invest and explore new fields,” Guo Guangchang, Fosun International chairman, told Nikkei Asia in an interview in September. “We will focus on areas that we are familiar with and in industries that we have an advantage.”

After the stock exchange listing, Fosun Group’s stake in Gland Pharma has reduced to 58% from 74%, but the Indian company will continue to be a local subsidiary under the control of the Chinese group.

Avinash Gorakshakar, heads of research advisory at Profitmart, pointed out that the fact that Gland Pharma is under the umbrella of a Chinese group cannot be ignored. “The company has strong fundamentals, but the only thing is: its promoters are Chinese … The market will obviously give it a closer look once it starts performing,” he said.

In this IPO, subscriptions by retail and non-institutional investors remained low at 24% and 51% of the offering, respectively. This may reflect the cautious view of some investors on Gland Pharma.

“The Chinese factor will play out, in case there is border action or Indo-China trade relations get worse, that overhang will be there,” Gorakshakar said. He sees that without the China factor, Gland Pharma’s IPO would have been even more successful. “That is the level of appetite [in the Indian stock market],” he said.