ALMATY, Kazakhstan — After repeated requests, China has offered to let Kyrgyzstan defer a scheduled debt repayment, as the impoverished Central Asian country remains under a cloud of political and economic uncertainty.

It was back in April that Kyrgyzstan first asked Beijing for some relief on the $1.8 billion it owes the Export-Import Bank of China, on loans taken for projects linked to China’s Belt and Road Initiative. Since then, the COVID-19 crisis has left a huge dent in the finances of a country that, in October, saw a contentious election annulled and a president turfed out of office in less than a month.

Finally, last week, China proposed a grace period that would see this year’s $35 million payment pushed back to 2022-2024 — at a 2% interest rate. Kyrgyzstan’s parliament is currently mulling the proposal, which would provide at least short-term support for a budget overstretched by responding to the pandemic and revenue shortfalls caused by the crisis.

Other Central Asian countries owe China money, too. Beijing in August deferred a $40 million payment for neighboring Tajikistan, which is still pushing for relief on its $1.2 billion debt to the Export-Import Bank of China.

In Kyrgyzstan’s case, analysts doubt that Beijing will be willing to make substantial commitments until a new president is elected in a poll scheduled for Jan. 10. “China is waiting for the dust to settle, nothing will be decided before the presidential election,” Niva Yau, a researcher at the OSCE Academy in Bishkek, told Nikkei Asia by email.

“China needs to see first who they are dealing with,” she added, as Beijing is wary that “whatever deal they sign now can be overturned by the next Kyrgyz administration.”

Beijing’s concerns over the instability in its neighbor have been compounded by an alarming wave of attacks on Chinese business interests in the country in early October, following the tainted election. Chinese-run mines and an oil refinery were targeted in shakedowns by mobs, using threats of violence to extort money.

China was already worried about its interests in Kyrgyzstan after another mob forced the cancellation of a planned $280 million logistics center in February.

“Chinese debt relief is a double-edged sword in Kyrgyzstan. If China gives debt relief, it will be attached to new projects, because that’s how these deals work,” Yau said. But she feels the public mood would be against this. “These projects won’t be possible because no matter what they are, there will almost certainly be a backlash.”

Little else is certain in this mountainous, landlocked Central Asian republic, following the coronavirus-triggered economic slowdown and the stunning rise of nationalist politician Sadyr Japarov from a jail cell to high office.

Until Oct. 6., Japarov was serving a lengthy prison sentence for organizing a kidnapping, but he was freed in the chaos during protests over a fixed parliamentary vote. Within 10 days he was installed as prime minister and became acting president after forcing the incumbent, Sooronbai Jeenbekov, to resign. 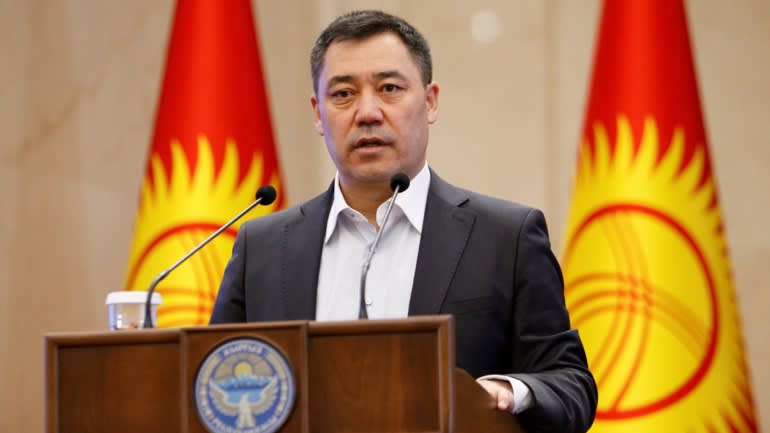 Sadyr Japarov, who rose straight from a jail cell to high office, is favored to win Kyrgyzstan’s presidential election scheduled for Jan. 10.

With all the levers of power in his grasp, Japarov stepped down as prime minister and acting president on Nov. 14 so that he can run in the upcoming presidential election — a race in which he is the clear favorite.

As he looks to further cement his grip, Japarov is keen to push through major changes to the constitution that would see executive power transferred from parliament to the president, leading observers to dub the revised document a “khanstitution” — a play on the idea that the plan would grant the president the free rein enjoyed by the Central Asian khans of yesteryear.

Japarov has proposed putting the constitutional reforms to a referendum on the same day as the January presidential election, but no plebiscite has been announced.

Whoever takes over in January, dealing with Kyrgyzstan’s creditors will be high on the agenda. According to the latest figures from the Ministry of Finance, the state debt stands at over $4.8 billion, which equates to around two-thirds of its gross domestic product.

Payments to external creditors, which in addition to China include the World Bank’s International Development Association and the Asian Development Bank, have increased over the years. They currently stand at around $200 million and will reach more than $300 million by 2024.

With Kyrgyzstan’s coffers under severe strain from the economic fallout of COVID-19, Japarov announced a “people’s initiative” to launch a special account where citizens can voluntarily make contributions to help the state meet its financial obligations. However, it could take some time to collect enough to make a dent in the debt mountain. An online survey conducted by the 24.kg news agency found that only 6% of respondents were ready to contribute, with a further 9% liking the idea but lacking the means to chip in.

Tapping into illicit funds acquired via corruption, which is rampant in Kyrgyzstan and which Japarov has vowed to conquer, may prove a quicker route. Rayim Matraimov, a former deputy head of the state customs service, was detained in October on suspicion of involvement in a scheme that deprived the state of millions of dollars of customs duties, which first came to light last year.

Matraimov, popularly known as Rayim Million because of the vast wealth he accumulated over the years, was released under house arrest after agreeing to make an initial payment of $24.5 million to the state — a legally unorthodox move.

He has so far deposited around $7.6 million, but this is a drop in the ocean: The smuggling ring is officially alleged to have siphoned off $1 billion, equivalent to more than 20% of the national debt.