KARACHI — Food prices are spiraling in Afghanistan as the local currency plummets under selling pressure and imports from Pakistan decline steeply due to a U.S. dollar shortage that prevents traders making payments.

Zia-ul-Haq Sarhadi, vice president of the Pakistan-Afghanistan Joint Chamber of Commerce and Industry (PAJCCI), told Nikkei Asia that food shipments from Pakistan to Afghanistan have reduced to a trickle largely because of the Taliban limiting weekly bank withdrawals to $200 — about 20,000 Afghanis.

According to Sarhadi, only cement shipments paid for before the Taliban returned to Kabul are crossing the border at Torkham, Pakistan’s northwest border post with Afghanistan. He told Nikkei that less than 200 trucks were coming across each day compared to more than 1,000 a few weeks ago.

The Taliban’s withdrawal caps are meant to prevent a currency flight while the U.S. continues to block access to Afghanistan’s dollar reserves of around $9.5 billion in American banks.

The IMF and the World Bank have also stopped dollar-denominated aid, which amounted to around 43% of gross domestic product (GDP) in 2020, and was the country’s primary revenue stream in the absence of robust tax collections and exports. 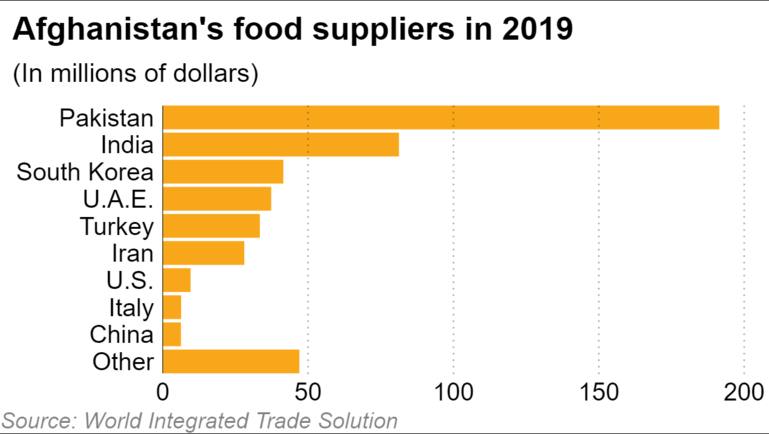 Afghanistan’s trade deficit was previously around 30% of GDP, and financed almost entirely by foreign aid, according to the World Bank.

Long queues form every day outside Afghan banks as panicky, cash-strapped locals attempt to extract their deposits. Many bank branches don’t open at all or offer only limited services as the cash crunch continues.

Pakistan’s finance ministry decided last month that perishable items could be exported to Afghanistan and paid for with Pakistani rupees instead of U.S. dollars.

The State Bank of Pakistan has yet to announce the new currency policy formally, and there have been major losses among traders. Zubair Motiwala, chairman of PAJCCI, told reporters in Karachi recently that exports to Afghanistan have declined by 50%.

The commerce ministry is offering no comment since Pakistani officials are barred from making statements on Afghanistan.

Haji Hazrat, director of the vegetable traders’ union in Kabul, told Nikkei that it was very difficult to trade with Pakistan with the U.S. dollar so high.

The Afghani plunged from 80.9 on the dollar on Aug. 15 — immediately after the Taliban took over in Kabul — to 87.9 on Sept. 30, according to data provided by investment research firm Morningstar, and has now hit 90. 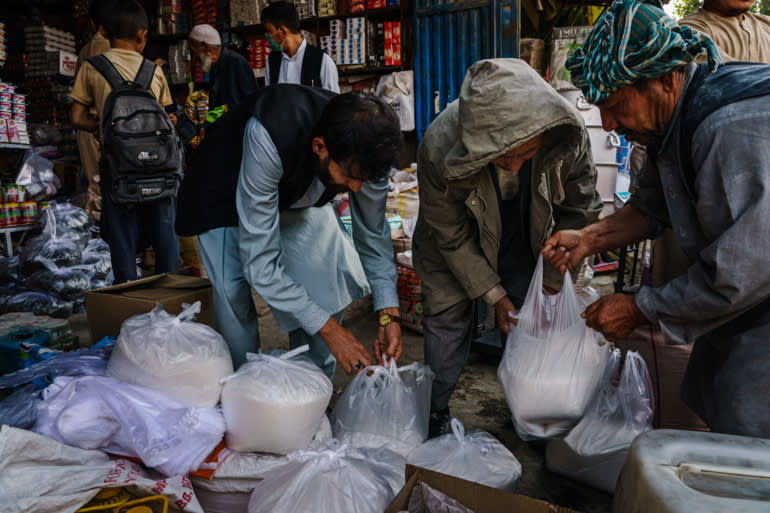 Shoppers at a grocery in Kabul’s Dashti-E-Barchi neighborhood last month.

Another Kabul-based trader, Ahmed Zia, has been importing cooking oil from Pakistan that is paid for with dollars from his Dubai office.

Zia said the local currency depreciation and shortage of dollars is being exacerbated by tighter Pakistani immigration controls and inflated airfares — all of which have increased the cost of doing business.

Commercial return flights between Kabul and Islamabad that used to cost under $300 can now be as much as $1,900 one way, he said.

Food items like flour and cooking oil have risen by 35% in recent weeks, according to a Kabul-based journalist, who requested anonymity.

“Afghans are grappling with the twin problems of unemployment and food inflation, which, in part, is being fueled by opportunistic traders selling commodities on the black market,” he told Nikkei.

Afghanistan’s food security is also threatened by possible disruption of the winter wheat harvest, which is about to begin. Rein Paulsen, the UN Food and Agriculture Organization’s director for emergencies and resilience, said Afghanistan is likely to face a 25% shortfall in the wheat harvest as a result of political disruption. That will leave one in three Afghans acutely food insecure.

Although Pakistani traders are reluctant to accept orders from Afghanistan, Islamabad has pledged to support the faltering Taliban government with food and medical aid. The government is also reportedly considering economic support to Afghanistan with technical assistance to the central bank, credit lines and even help with printing the local currency.

Being landlocked, Afghanistan is heavily reliant on Pakistan for the supply of many commodities, including foodstuffs, construction materials and medicines through bilateral trade and transit through Pakistani seaports. However, since 2014, Iran has replaced Pakistan as Afghan’s biggest import partner. According to UN data, Afghanistan imported $1.10 billion from Pakistan in 2019, while imports from Iran and China were $1.24 billion and $1.19 billion respectively, relegating Islamabad to third place. Pakistan’s crackdown on Afghan smuggling and frequent border closures to thwart terrorism and contain COVID-19 have contributed to the drop.

Pakistan nevertheless remains Afghanistan’s main supplier of perishable goods because of its proximity to urban centers in the east of the country. In 2019, Afghanistan imported food worth over $191 million from Pakistan, which according to the World Bank was about 40% of the country’s food import bill.